Why Daddy Should Read the Bedtime Story

“Are you sitting comfortably? Then I’ll begin …”

So began the famous BBC radio program, 'Listen With Mother', which broadcast stories read by women to children (and their mothers) from 1950 to 1982.

Reading to children has always been associated with mothers.  Think of any image in the media depicting 'story time' and chances are it will be of a mother snuggled up with one or two children and a huge book.

While many men enjoy reading to their children, only 13 percent of dads "are the main reader with their child" (according to a 2013 survey by British charity Booktrust) and 39 per cent of fathers never read to their kids at all (source: US National Center for Fathering and the National Parent Teacher Association).

A 2015 study from Harvard University USA suggests that children might benefit more from having their father reading them bedtime stories than their mother.

It found that dads initiate more "imaginative discussions" and advance their children’s language development because of the way they read to their kids.

Mothers tended to ask 'teacher-like', factual questions, such as 'How many apples do you see?' whereas fathers preferred more abstract questions, sparking imaginative discussions.

"Reading is seen as a female activity and kids seem to be more tuned in when their dad reads to them – it’s special," claimed Harvard researcher, Elisabeth Duursma.

The majority of teachers in pre-school and primary education are female.  If fathers don’t read to their children, boys may miss out altogether on hearing a male narrative voice and conclude that 'reading is for girls'. If Dad enjoys reading, his sons are likely to as well.

But it’s not just about the boys.  Duursma’s research revealed that girls, in particular, benefited more academically if read to regularly by a male: "The impact is huge – particularly if dads start reading to kids under the age of two."

So why are dads less likely to read the bedtime story?  Is there still an assumption that this is the mother’s domain?  Or do long working hours mean Dad is never home before the kids are already asleep?  Are they too stressed and exhausted to face twenty minutes with Peppa Pig and the Hungry Caterpillar? Or just plain awkward and uncomfortable about reading aloud?

The wise daddies have discovered the secret mums have known all along:

Reading to your kids is fun!

So dads, schedule in some reading time with your kids and let’s hear some more male voices saying, “Are you sitting comfortably?  Then I’ll begin …” 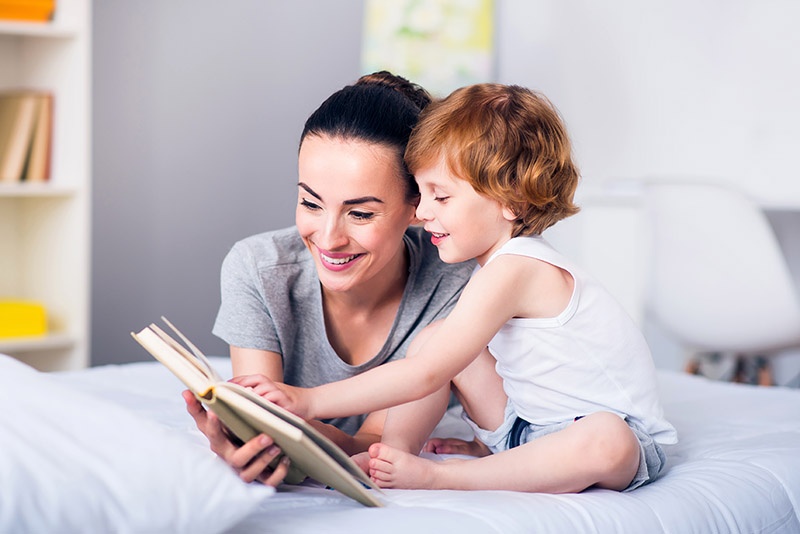 How to Read to Your Child