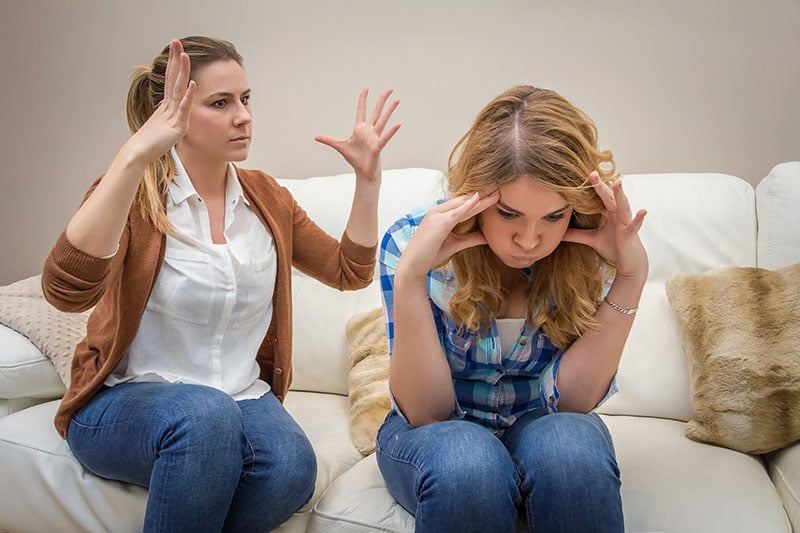 As your children move closer to adulthood, their hormones rage and their thought processes become more sophisticated, it is inevitable that conflict will arise in the home.  It goes with the territory of parenthood.

Short of growing a thick skin or hiding away for a few years till the worst is over, how do you survive these difficult years of teenage confrontation?

Don't be afraid to have an argument

Their explosive temperament may be unpleasant but many teenagers find arguing cathartic.  It gives them the opportunity to let off some steam, communicate their anxieties and work through their issues (albeit in a dramatic manner).

How you respond can help them deal with arguments outside the home and develop better communication skills.

Remember who's the grown-up

No matter how upset or emotional you get, resist aping their style – no screaming, flouncing out, slamming doors, name-calling, threatening or attacking. Model how to argue with respect and dignity.

Don't be a know-it-all

Statements like these will only serve to alienate your child.  They will think you’re not listening to them and don’t appreciate them as an individual.

Show that you are interested in your child’s point of view.  If your teen yells the classic “You never listen to me!” or “You don’t understand me!”, bite your tongue, muster your patience and respond with “I’m sorry.  I’m listening now.” or “I would like to understand you.  Could you try explaining it another way to help me understand?”.

Try to work out the main issue your teenager is upset about; sometimes the discussion gets heated when peripheral gripes come into play and muddy the focus.  Paraphrasing and mirroring back your child’s statements may help you both identify the key concerns, eg “So what I hear you saying is that you want to stay over after the party because your friends are and you don’t want to miss out on anything.  Is that right?”.

Don't give in to bad behaviour

If you give in to your teenager’s demands because you are intimidated or disturbed by their screaming, threats and tears, you will encourage them to repeat that behaviour every time they want their own way.

“You never clean up after yourself!”
“You’re always sitting around playing computer games!"
“That’s the worst lie I’ve ever heard!"

Such comments may be close to the truth but they will only rile your teen more.  Better to use quantified and considered expressions, such as “It would be really helpful if you would tidy your school things away” or “You’ve been playing that game since half past two”.

Yes, it is annoying that your teen has left wet towels on the bathroom floor AGAIN but maybe you could let the chastising go once in a while – particularly if your child seems overly tired or preoccupied with other worries.

Similarly, don’t curate an arsenal of your child’s past misdemeanors to hurl at them during a quarrel; focus on the issue being debated without bringing in a back-catalogue of transgressions.

Angry teenagers frequently yell spiteful insults they don’t really mean, with the specific intent to hurt.  Try to remember this when they attack you with personal, wounding non-sequiturs like, “All my friends think you’re ugly!” or “You’re the thickest person I’ve ever met”.  Ignore the invective and move on.  Or …

Show your child that you can see the funny side and laugh at yourself.  NB Don’t laugh at them during a row, no matter how comical they appear.

When battles get particularly heated and go round in circles, it’s counter-productive to keep fighting till dawn.  Better to withdraw for a while and say something like "I’m getting upset and angry and so are you.  I’m going to go away and think this over for a while. Let’s talk about this later when I’m not so tired." Similarly, if your teen wants to escape an argument and hide in a bedroom for a while to mull things over (or sulk), give them the space to do so without badgering them.

Be consistent and reassuring

Despite their arrogance and bluster, teenagers are notoriously insecure and sensitive to criticism.  Don’t brood, give them the silent treatment or change daily routines to ‘punish’ them (eg omit their place at dinner, not be there to pick them after soccer practice). Keep day-to-day life as normal as possible. Let them know they are safe and loved, even if you are angry with them:

“OK so I understand you hate me and never want to see me again and I’m very sorry to hear that.  But I love you and I will be right here when you need me.”

Pray for your teens.  They need you.

10 Signs You Are Raising a Spoilt Child

10 Great Ways to Embarrass Your Kids