How I Got Sucked Into My Kids' Gaming World 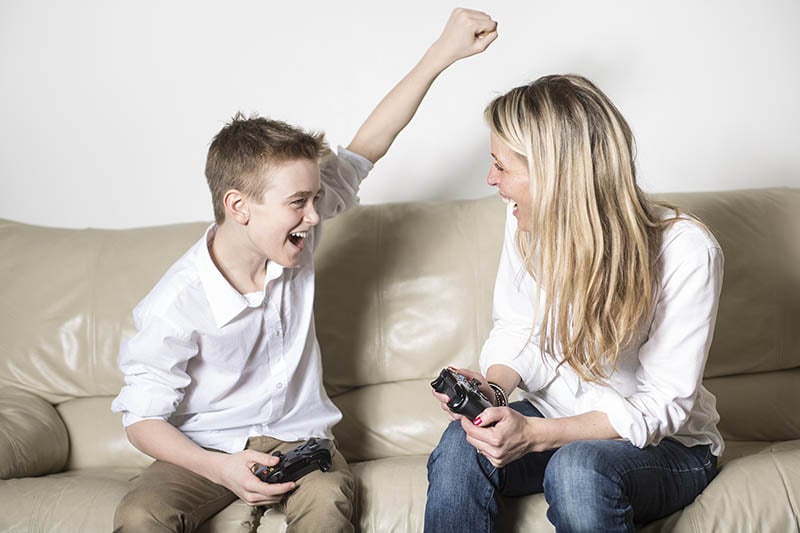 Like many parents, I struggle with kids and screen time, most notably with computer games. I set time limits on play, check games are age-appropriate, ban devices from the bedroom and offer all sorts of alternative play and activities … but still get disheartened that my two boys would rather race virtual cars and navigate imaginary worlds than kick a football around or build Lego.

I could blame my husband for introducing the iPads and games console in the first place (Xbox One, since you ask) but I didn’t object when they were first purchased. And … well … it is kind of handy to have that electronic babysitter when you need to get on with something important or grab half an hour’s peace.

Only it doesn’t quite work like that in my house; my boys want me to watch them play, to talk about their games, to share their experiences with me. How inconvenient! Worse still, they nag me to join in with them. I don’t have time to waste twiddling buttons and dials. I have more important things to do like … like … the ironing or … pulling my nails out with pliers. Half the time I have no idea WHAT is happening on the screen in front of them. I don’t understand it. Nor do I want to. There is no space in my busy life to start learning all that stuff now. It’s not like a quick round of Rummy or game of Cluedo – some of these games go on FOREVER. Games like Clash of Clans continue even when you’ve logged off. You re-join the game three days later to find a gang of marauding goblins has stolen all your trophies and ransacked your village in your absence. I can’t deal with that sort of stress and disappointment!

Or so I thought …

But recently, I’ve had a change of heart.

I surrendered to a Friday evening of collaborative computer gaming.

Now, I’m not going to lie to you - I had my reservations. And they were partially justified:

On the other hand:

“Parents miss a huge opportunity when they walk away from playing video games with their kids,” claim scientists from Arizona State University who study the educational aspects of video games. “Often parents don’t understand that many video games are meant to be shared and can teach young people about science, literacy and problem solving. Gaming with their children also offers parents countless ways to insert their own ‘teaching moment'.”

Computer gaming with the kids has now become a regular feature in our house - albeit only once a week (that ironing doesn't get done on its own!).  It's even something I've started to look forward to. I enjoy the interaction, collaboration and camaraderie. We share a new set of cultural references and vocabulary. And I'd much rather do this than encourage a solitary gaming habit in my boys.

My kids are primary age and I suspect they will be less keen to game with their dear ol' mum once they enter their teens. But maybe not. Maybe this will be a sneaky way to connect with my boys in those uncommunicative adolescence years - particularly if I hone my gaming skills and provide more of a challenge. Now, pass me the remote - I need to practice!

Some of the games we've enjoyed

"It's creative!" they said. "It develops problem solving skills." We've all heard about the educational benefits of this 3D block-building game but my first experience was one of utter confusion: "What am I supposed to be doing?"  Whatever you want. "But I don't know what I want ... and if I did, I wouldn't know how to do it!"
Tip for parents/newbies: Play the tutorial game first.

The Powder Toy is a free physics sandbox game, which simulates air pressure and velocity, heat, gravity and a countless number of interactions between different substances. The game provides you with various building materials, liquids, gases and electronic components which can be used to construct complex machines, guns, bombs, realistic terrains and almost anything else. It's a solo game but my 10-year-old and I enjoy experimenting with it together. Addictive.

Not so much a game as a raft of user-generated 3D worlds and experiences. Players have their own avatar, personal piece of virtual real estate and a toolbox for building. They can explore other players' worlds, collaborate, interact and even code their own experiences for others (our next school holidays project). For under-13s ensure privacy settings and chat-blocking are implemented under Roblox's parental controls.

I confess, this one was my purchase (and my favourite!) but I once had five 10-year-old boys in my living room playing this game obsessively for over an hour. You need a decent web camera on your screen or a motion detector/sensor to check that your movements tally with the figures whose dance moves you are trying to copy. Dance accuracy wins points. Hilarious and a great workout too!

There are no soccer fans in our house but we love to play against each other on the screen - particularly as four of us divide nicely in two opposing teams. We're useless - still slide-tackling the air and home-goaling - but it's sooooo much fun.

Do You Know What Your Kids Do Online?

How Plugged-in Families Can Have a Device Free-ish Holiday