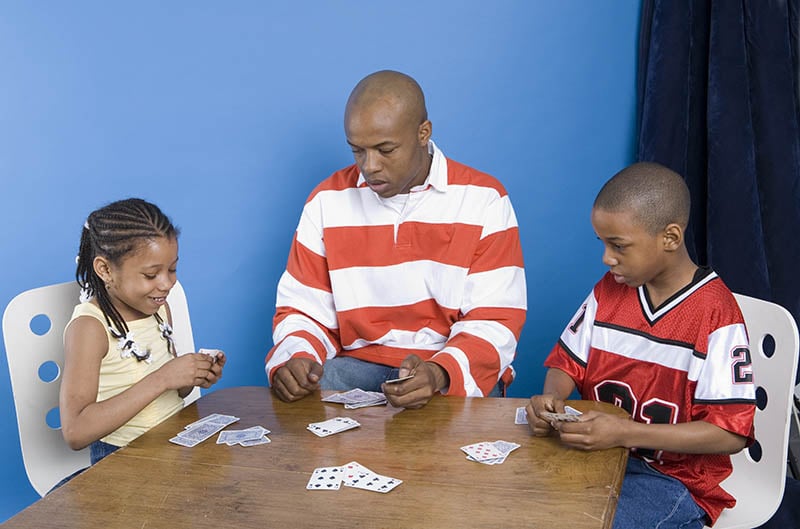 Who’s for a quick game of cards?

Here are 10 great games to play with your children to sharpen up their primary maths skills ...

Remove all face cards, leaving a deck of 40 cards. Aces count as 1s. Deal all cards out face-up in one long horizontal row.

The aim of this solo game is to use up all cards. Remove any adjacent cards that add up to an even number.

Play the same way but removing adjacent cards that add up to an odd number.

Remove all face cards and divide into two piles. Give one pile to each player. Aces count as 1s.

Players turn over the card from the top of their pile simultaneously and place in the centre of the table.

The first to add the numbers together, double them and shout out the answer wins that round and gets to keep both cards. The winner is the player with most cards at the end.

Example: Players turn over a 3 and a 5

The player who shouts out ‘16’ first wins that round. 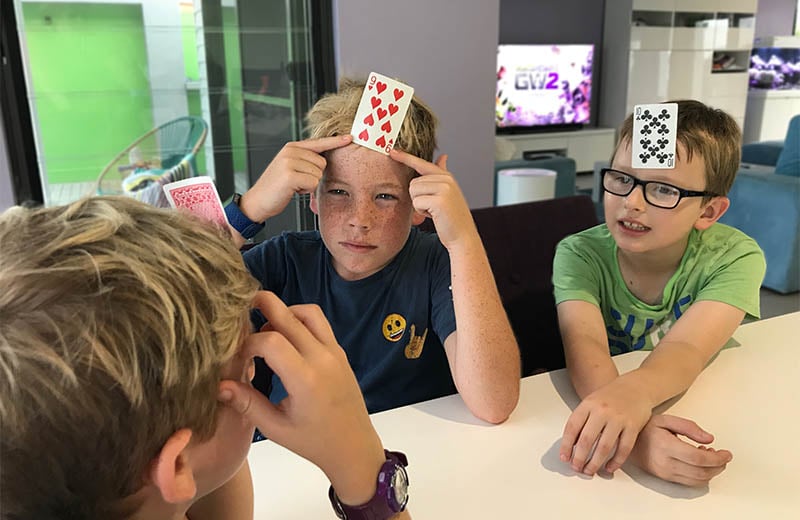 Use all 52 cards. Aces are low (=1). Players will also need an equal number of counters/matchsticks to act as ‘poker chips’

The dealer gives each player one card face down. Without looking at the card, each player holds it against their forehead so that only the other players can see what it is and puts two of their chips into a ‘kitty’ in the middle of the table (three chips each if there are three players).

Players then look at their own cards and the one who named their card’s status correctly (highest, lowest or middle) collects the chips from the kitty. If more than one player was correct, the chips are divided. (If they cannot be divided equally, the remaining chip is left over in the kitty for the next round).

After chips are collected, the deck is shuffled and re-dealt for the next round.

Make the game strategic rather than a game of chance: Play as above but deal just seven cards to each player. Allow players to see their own cards (holding them in a fan towards themselves). Each player then gets to select which card they play on their turn. The aim of this variation is to make exactly 35 (not more than 35). The winner of each round gets to keep the cards (not to be used again in the game) and all players are dealt cards from the remaining pack so that they always start each round with seven cards. 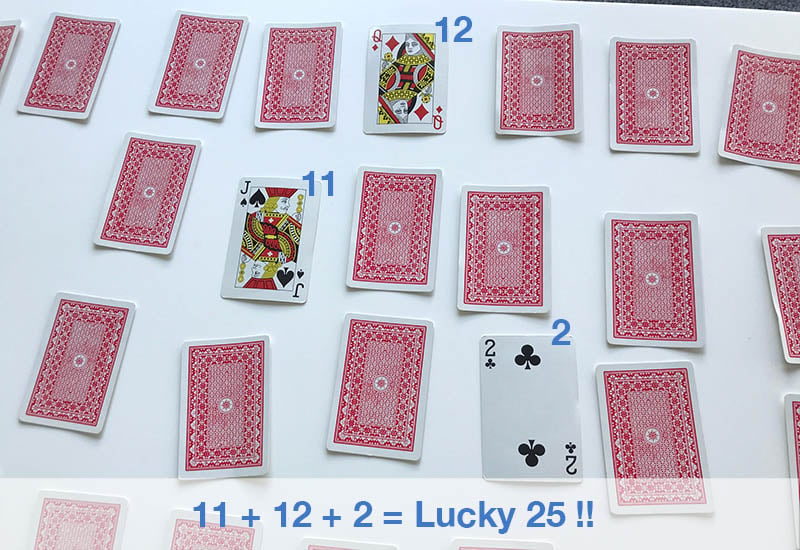 Players take turns to flip over three cards. If the card values add up to 25 (eg King + 4 + 8 = 25), they get to keep all three cards and have another go. If not, they turn the cards back face down and the next player takes their turn. The player with the most cards at the end wins.

Remove Jokers. Aces count as 1s, Jacks as 11s, Queens as 12s and Kings as 13s. Deal five cards face down to each player.

Simultaneously, players turn their cards over and race to put them in order from the highest value to the lowest, eg Queen, ten, three, Ace. The first one correct is the winner and gets all the cards. The player with the most cards at the end wins.

Both players turn over the first two cards in their pack and place in front of them. They subtract the smaller number from the bigger. The player with the biggest difference wins all the cards in that round. If both players' subtraction makes the same number (eg one player has a King and a 10 and the other has a 9 and a 6, they will both have a difference of 3), the players then add the value of their two cards together. The player with the highest sum then wins the cards. If both players have turned exactly the same value cards (which make the same difference and sum), the cards are left in the middle to be won in the next round.

Player 1 picks up the first two cards on the pile and multiplies them together (eg Jack x 8 = 88), without the other players seeing. The other players have to ask yes/no questions to find out what the product might be. E.g. is it bigger than 20, divisible by 5, is it a prime number, is it an odd number etc. 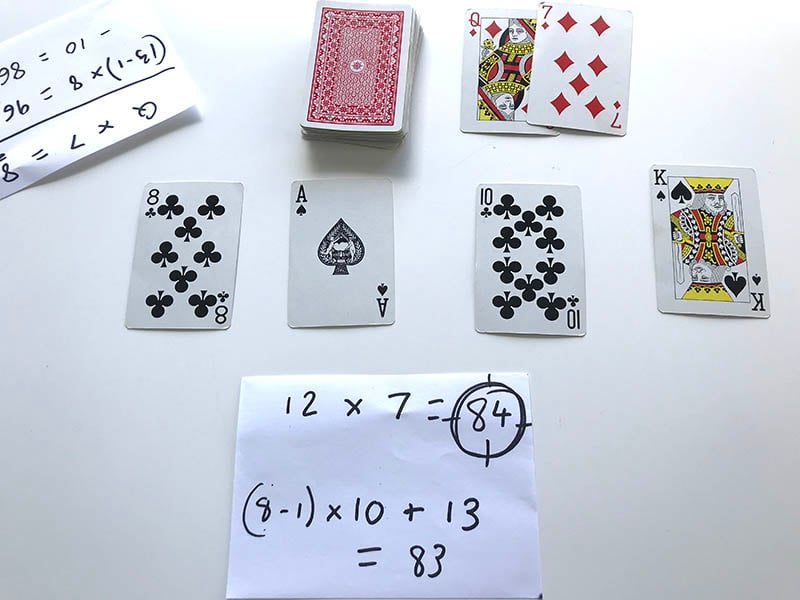 The aim of the game is to add, subtract, multiple and/or divide numbers to reach a target number.

Any player turns over the first two cards from the pile and multiplies them together (eg 3 of Hearts x 7 of Clubs = 21). This is the target number players will try to reach.

The next four cards in the pile are turned over and placed in front of the players.

Remove the picture cards from a pack, shuffle the pack well and place in a single pile, face down. Aces are low (=1)

Three players pick up a card up from the pile (without looking at it) and hold it up against their forehead facing outwards so  that all the other players can see their card and they can see everyone else's card ... but not their own.

The 'facilitator' (or fourth player), adds up the value of the three players' individual cards (eg 2 + 4 + 7 would equal 13) and tells the other players the total.

The three players race to calculate and shout out the value of their own card. (They do this by adding the other two players' cards together and subtracting that number from the total number calculated by the moderator.) The first player to shout out their own number correctly wins all three cards.

Example: If a player sees that the other two players' numbers are a 7 and an 8 and the total is 21, they can work out their own number by adding 7 and 8 together (=15) and subtracting that number from 21  - their card will be a 6. 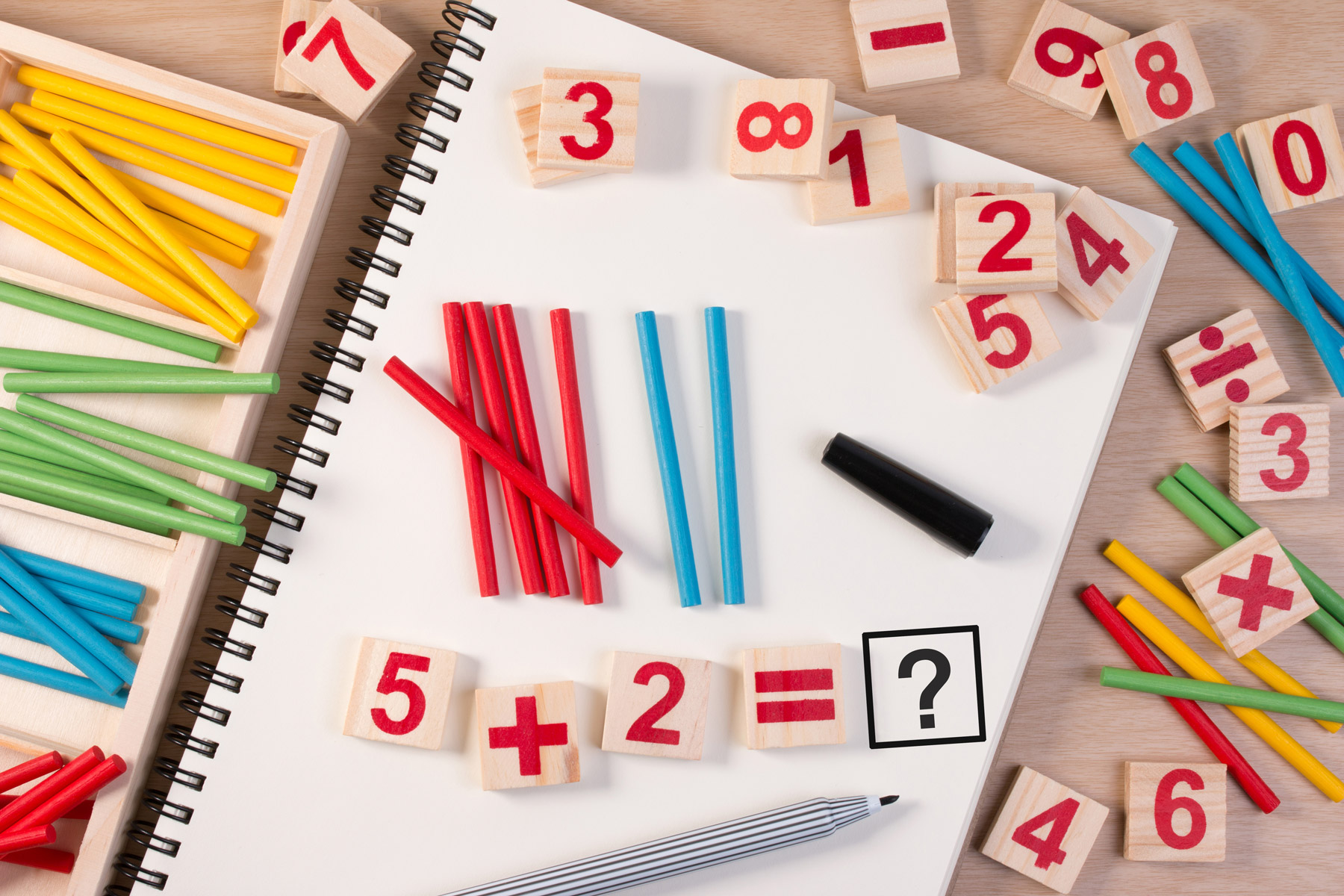