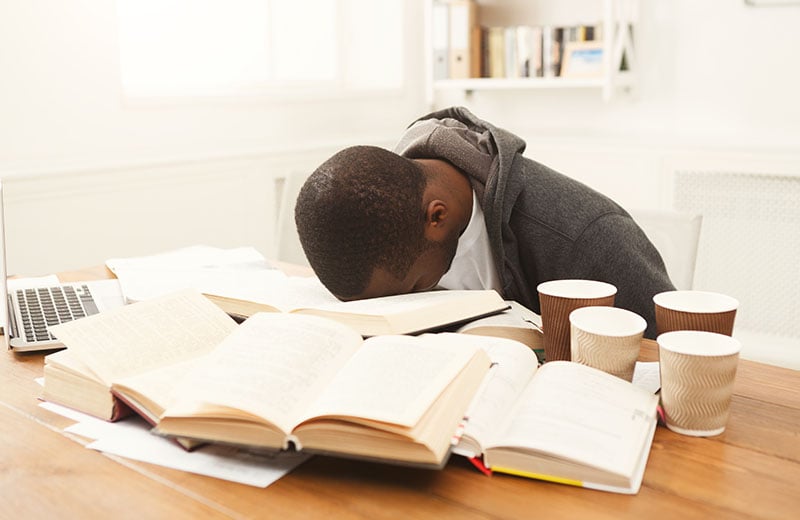 Many teenagers today are sleep deprived. They should be getting between nine and 10 hours sleep each night, yet most get only seven or eight hours. Some get less.

Sleep deprivation is akin to jet lag. It causes young people not to function at their optimum. It can be the cause of poor behaviour, mental health problems and low functioning in the classroom.

Sleep maximises the brain growth that occurs during adolescence. It also consolidates learning. Sleep research has shown that when a young person is asleep, the brain practises what it has learned during the day. So sufficient sleep consolidates past learning as well as keeping a young person fresh to maximise their future learning.

Sleep experts stress that while adults may not have control over biology we can assist young people to establish good sleep patterns. The first step is to eradicate some of their bad habits, starting with the following:

1. Being glued to a digital screen

The digital devices a young person uses to roam through cyberspace are as addictive as cocaine, with similar arousal effects as well. The blue light emitted by mobile devices stimulates the brain into keeping kids awake well into the night.

Tip: Get your kids away from digital devices at least 90 minutes before bedtime.

The brain associates activity with location. When young people are at their desks in school it’s easy to get into study mode. They associate learning and productive activity with their classroom and its furnishings. The same principle applies at home. If they fire up their laptops and work while on their beds, it is hard for them to mentally switch off from their schoolwork when the light finally goes out.

Tip: Keep homework out of bedrooms. If they must work in their rooms, confine study to a desk.

Moping around the house is a huge part of the adolescent experience. However, spending all day away from natural light is shown to lead to anxiety and depression, which are both causes and symptoms of lack of sleep. Put a cap on moping about and encourage them to go outside – take a walk, meet a mate, do an errand.

Tip: A minimum of one hour outside a day helps keep insomnia at bay.

4. Sleeping in late on weekends

The sleep–wake cycle for teenagers is delayed by up to two hours. That is, they get sleepy later and wake later than when they were children. In most teens, melatonin – which makes them sleepy – is secreted around 11 pm. Cortisol, the chemical that wakes them up, is secreted at 8.15 am for many. So the adolescent brain wants to be asleep just when most them need to be waking up to go to school. Many teenagers catch up on this lost sleep on the weekend. However, if your teen is sleeping in until midday on weekends then his whole sleep cycle is being thrown out of whack.

Tip: Keep sleep-ins to no more than an hour longer than normal to keep the sleep clock operating on a regular basis.

5. Talking on their mobile phones

A mobile is an extension of the person for most teens. Unfortunately, there’s no getting away from the fact that mobile phones may be harming our health. One study (https://www.emf-portal.org/en/article/15274) found that radiation thrown off by mobile phones can seriously throw off sleep in heavy phone users. The study found that regular mobile phone users reported more headaches, took longer to fall asleep and had difficulty experiencing a deep sleep.

Tip: Encourage young people to limit the length of their calls and place a moratorium on mobile use 90 minutes before bedtime.

6. Consuming caffeine and other stimulants

It’s a familiar story. It’s seven o’clock in the evening and your teenager hasn’t started a big assignment that’s due the next day. Needing to stay awake for the big job ahead, she drinks a coffee or a caffeinated soft drink or two to keep her adrenaline high. Consuming caffeine in any form after dinner is like throwing a wrecking ball through regular sleep patterns. The brain needs to calm down rather than be artificially stimulated if sleep is to occur.

Tip: Confine caffeinated drinks to mornings to minimise their impact on sleep.

According to beyondblue, one in seven teenagers experiences a mental health disorder. Many experts agree that if they were to choose just one strategy to improve young people’s wellbeing it would be to increase the quality and quantity of sleep that teenagers have. That’s how important sleep is to a young person’s wellbeing.